Yuri Morita was born in Yokohama, Japan. Her parents and family and the kind of household she grew up in was a strong influence in her life. Both her parents were very socially involved. Her father was a family court judge who had a deep concern for juvenile delinquent youth. Her mother was a pediatrician who started an alternative school for children to learn from the natural environment. guests often stayed at their home and the household was a place of great activity and discourse about larger societal questions. Her parents were both converted Catholics, though her father came from a Buddhist family and her mother came from the indigenous Japanese Christian movement called the non-church movement (無教会, Mukyōkai) that gathered in people's homes and was well known for speaking out against social injustices.

College and the Social Movement in Japan:

During the time that Yuri was in high school and college the labor movement, women’s movement and other social movements were active in Japan.

“When I was in there were so many social movements and uprisings. I went to Waseda University, and at that time Waseda was one of the centers of the active student movements, so we didn't have many classes going on at the time. There were always demonstrations happening. But I wasn't that interested in the student movement per se in Japan because there was so much infighting between different sects of the movement.”

Yuri decided to leave school and join the farmer's struggle that was taking place at what is now Narita International Airport.

“It was called the Sunlika struggle. At that time the area, which is now Narita airport, was all farmland. The proposal for construction of a new international airport would change the entire into an industrial complex. The farmers were opposed to that. It became a central struggle of the social movement at that time in Japan. A lot of international media and people in the movements came to Sunlika. I went to Sunlika and stayed there with the farmers for about a half year. And there were other students like me. I met so many people involved in social change movements.”

When she was 26, Yuri decided to leave Japan. She had been working as a journalist, a good job that she liked, writing and interviewing people, and getting published. But she felt there was something superficial in what she was doing.

“I wanted more guts in my heart. I was seeking a spiritual experience. I decided to leave Japan but I didn't know where to go. So I told myself, OK, there are two criteria to choose the country where I'm going. One is that it be very far away so I won’t come back easily. And two, a place where the language is not English. I wanted to go to a place where I didn’t know the language. So that's how I thought maybe Mexico would be good. I didn't know any Spanish. At that time, there was no direct flight to Mexico. It took two days to get there. That was in 1976.”

After living in Mexico, Guatemala and Central America, Yuri eventually came to the United States in the late 1970s and sought to meet Native peoples in the United States. She lived with and traveled with people in the American Indian Movement (AIM) and learned about Native spirituality and their struggle. She also came into contact with the Nipponzan Myohoji, Buddhist peace makers, and the Japanese Buddhist nun, Jun-san, who was closely connected with AIM.

“There were already a lot of European-Americans who had contact with AIM people at that time. There wasn’t really anything special about me being Japanese. Also I looked Mexican at that time. My skin was dark and I spoke Spanish better than English then. I didn’t know English much. So I don’t think they really looked at me as a 'Japanese' Japanese. Through Jun-san and the other Japanese monks, they had so much respect for this Buddhist order and their spiritual practices and Japanese people.”

“Native American spirituality and practices I experienced like sweat lodges, sacred walks, or being solitary in nature really nurtured my belief in the power of nature. Since then, I have been a part of Native People's struggles and activities. Their political or social activism is based on their spiritual belief system and that really is the teaching that they gave me.”

As part of Yuri's involvement with AIM she helped organize several cross-country peace walks organized by Native peoples, such as the Long Walk for Survival (1979), and a house for native youth called Open House under the leadership of Bill Wahpepah. Contributing her skills as a writer, she wrote a graduate thesis at the Graduate Theological Union on the unique convergence of the Native American community and Nipponzan Myohoji Buddhist sect, their histories, traditions and what they contributed to each other in their collaboration for social change. She also authored a biography of AIM leader Dennis Banks in Japanese, which received the Asahi Journal Non-Fiction Award in 1988.

In 1981, the Nipponzan Myohoji Buddhist sect was organizing a year-long world peace march calling for an end to nuclear weapons. Yuri was living in Japan and pregnant at the time, so she considered what this would mean for her given the timing in her life.

“I thought, if the baby is born, I probably will have to stay home and take care of the baby. And writing is going to be difficult when baby is around. So I thought maybe I should go for a whole year to this peace march. And the baby will with be with me on the walk. And I thought, that's a wonderful way for the baby to grow up in first year, with so many different people and getting to sleep outside often. Being on the March and walking in nature would be much better for the baby than being in an apartment. And that would be healthy and mentally for me too. So I decided to do that.”


The World Peace March was to start in 1981 in seven different locations which would all end together in front of the United Nations in New York on June 12, 1982. Yuri’s role was to organize the route of walkers leaving from Japan, walking through the Hawai'ian islands, flying to San Diego and walking up to Seattle, then flying to the northern end of the East Coast and walking down to New York. On the route they would visit military bases and military sites.

By the time the walk started, Yuri had given birth to her oldest son, Ren (lotus in Japanese), who was three months old when the year-long walk began. On the walk, Yuri's role as coordinator was to assist and coordinate the traveling caravan of peace walkers during the walk. She went ahead to the next town and coordinated churches or peace organizations to welcome the peace walkers and find places for them to stay.

“Our first son was on that walk the whole time. He was three months old when we started so we always carried him. As a baby, he performed a special role as a symbolic messenger of peace, of why we were the march. We were doing this for the future generations. The peace marchers loved to carry the baby, especially in the winter time, because he was very warm to carry on your back or front. So he was cared for communally by people. We were always outside, always walking, and during the warm weather we slept outside and ate outside. So he was very much in nature his first six, seven, eight months. And I think that was good for him. He became the symbol of what we were doing.”

In New York on June 12, 1982, the marchers finally arrived and joined over a million people from all over the world who gathered to call for nuclear disarmament. This was the largest anti-nuclear protest and the largest demonstration on earth at that time and included 1,665 civil disobedience arrests. 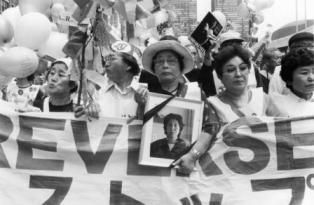 Yuri continued to be involved with issues of nuclear disarmament. Several times she accompanied US delegations to the Hiroshima Peace Conferences in Tokyo, and in 1983, as part of the Ecumenical Peace Institute based in Berkeley, helped to organize a multi-city three-month Fast for Life. People in Oakland, Paris, London, Toyko, Hiroshima and Canada fasted for days and weeks, appealing to their governments to stop nuclear armaments.

Being a Mother and Making Society Better:

“My three children are very important to me. Being a mother, I want to be a person who can contribute to make society better. So in that sense I always looked for a career where I could do that.”

After the Peace March ended in New York, Yuri looked for a job that contributed to social change. She began working in child-abuse prevention, developing trainings and child abuse prevention programs. Yuri sees this work as also promoting a nonviolent society. In her words, “the violence in intimate relationships like child abuse or domestic violence have a lot in common with violence on a larger scale, like war.”

Following that, she worked for seven years as a trainer in the Office of Affirmative Action at the central administration of the University of California where she researched and developed program and curricula for teachers and staff of the university to address racism, sexual harassment, cultural diversity, disability and leadership skills needed for a diverse society.

In 1997, she returned to Japan and established the Empowerment Center, which provides training and workshops on diversity, human rights issues, child abuse and domestic violence prevention. She still continues as the director of that center today. The purpose of all her training is for participants to gain theory, knowledge and skills for effectively working in the fields of education and social services, and is rooted in an underlying principle of empowerment that “draws out an inner strength that allows you to embrace yourself." She has also been involved serving on a committee, offering consultation to lawmakers, and lobbying for changes to the law on child abuse prevention passed in 2000.

In 1999, over ten years ago, Yuri founded a peace group called Seitaka Onna (Women Walking Tall). Girls and women of all ages walk on stilts and in costumes for peace and nonviolence. Every year they march in the town of Hiroshima for the Hiroshima Memorial day.

Yuri has also authored 25 books for adults and children on matters of empowerment, human rights and diversity, child abuse and domestic violence.

What sustains you to do this work?

“This is a quote from Alice Miller, one of the pioneers of revealing the problem of child abuse internationally. She said, 'Fear and anxiety are contagious. But so also is a tiny bit of courage.'”

Some online articles about Yuri:

Share your own reflections and experiences. Some of our own thoughts and learnings appear on the Reflections page; we hope you will share yours on the Comments page.

This project was made possible by the R2W/Critical Faith community, Pitzer College, and the California Council for the Humanities. Our thanks to our sponsors, our mentors, our team of researchers, and the women who graciously allowed us to interview them and reflect on the stories of their lives

You can reach us via the comments page, or by emailing apiwomenfaithaction, at gmail, dot com.